Agile Transformation as Told Through Gifs

I’m afraid this article starts with some bad news: Agile transformation is neither quick nor painless.

This harsh truth can be a rude awakening, particularly for teams and organizations who expect to decide “We’re going to be Agile!” one day and reach the peak of high performance the next.

The road to true agility, particular in a marketing context, is rocky and long (that’s why Agile exist). There are several models to help visualize an Agile transformation, but one of my favorites is an adaptation of the Kübler-Ross model: 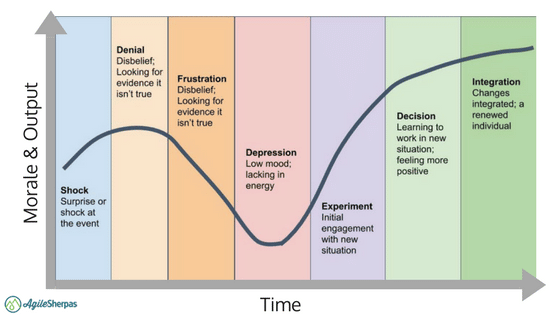 This model flies in the face of our expectations for change, which usually looks more like this:

It makes it painfully clear that there are many moments of disorientation, discomfort, and low performance to be gone through before we can fully enjoy the fruits of Agile transformation.

The process can be stressful, so let’s examine the Kübler-Ross model of change with the help of gifs to lessen the sting a little.

The process begins when a team learns that they’re in for some kind of change. They respond with shock and surprise, because most of us assume that tomorrow is going to look a whole lot like today.

From there they enter denial and disbelief. During this phase they’re searching for evidence that the change won’t actually happen, or that it’ll just be temporary.

Notice that at this point you may see an uptick in morale and performance. 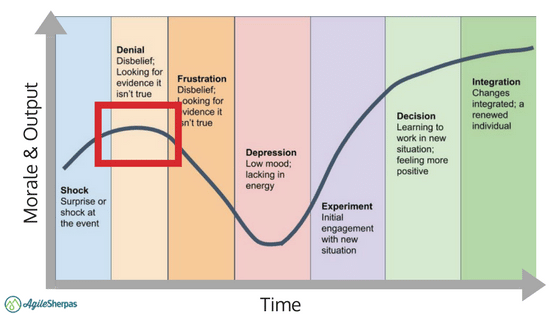 Particularly for teams and team members who aren’t down for an Agile transformation, this upswing in output is an effort to prove that change isn’t necessary. It’s typically indicative of fear and uncertainty around the process of change.

Education is crucial to shorten these painful early phases.

Most of the negative attitudes and behaviors that teams exhibit here come from a lack of information, so coaches and change leaders need to work hard to bring the team up to speed.

Once it becomes clear that transformation is, in fact, going to happen, the team may enter a period of frustration. Their efforts at forestalling change have failed, and it looks like they’re just going to have to deal with it.

Some team members may display their frustration through withdrawal, while others get downright angry.

Having a good Agile coach on call to help people through these periods can be quite useful. Their role during times of frustration and its subsequent phase, depression, is to give team members the tools they need to process their reactions.

An outside advocate of some kind may be particularly crucial during the depression stage, when energy and morale are likely to be lowest.

Some teams and team members will seem to sail through these less-fun stages, while others will be mired there for what feels like forever.

Remember, there’s no avoiding these phases, but you can shorten them by educating teams early on and enabling them to understand and move through this trough.

As teams move out of their lowest point, they begin to experiment.

This represents their first real engagement with the new situation; in the case of Agile transformation it marks the first time they’re really starting to adopt Agile practices and behaviors.

Following some successful experiments, the team learns how to operate in their new paradigm. They’re moving into the decision phase.

During both the experiment and decision stages you’re likely to see significant improvement in both morale and output.

The final phase of Agile transformation, according to the Kübler-Ross model, is integration.

Here the proposed changes, which were so resisted during the denial and frustration phases, becomes fully integrated into the team’s day-to-day behavior.

The team has now been transformed, even if only at the most superficial level, and are free to continue growing and improving their agility.

Repeating the Process of Agile Transformation

While I hate to be a downer, I have two more pieces of bad news before we’re done:

While Agile transformation may be a never-ending cycle, don’t despair during the times your team is wallowing in denial, frustration, or depression.

These are times for them to build connections as a team and better understand their own professional and emotional needs. It’s not a journey to be completed once, but a circle that we’re always going around.

The post Agile Transformation as Told Through Gifs appeared first on AgileSherpas.