Some industries and verticals have a much easier time creating engaging content compared to others. Highly regulated verticals like finance won’t usually see viral engagement for a narrow, industry-specific content marketing campaign like a campaign for a travel brand would see, but that doesn’t mean it’s impossible to create great content for every industry. Strategies, goals, and benchmark metrics need to be tailored to the specific vertical to avoid comparing apples to oranges.

In order to avoid holding content marketing strategies and campaigns to unrealistic standards, my team at Fractl sifted through nearly 350 of our own client campaigns across 15 industries to help establish benchmark metrics defining success by vertical in a recent study. While the overall average campaign earned 90 media placements, that number varied drastically when looking at campaigns in different verticals. 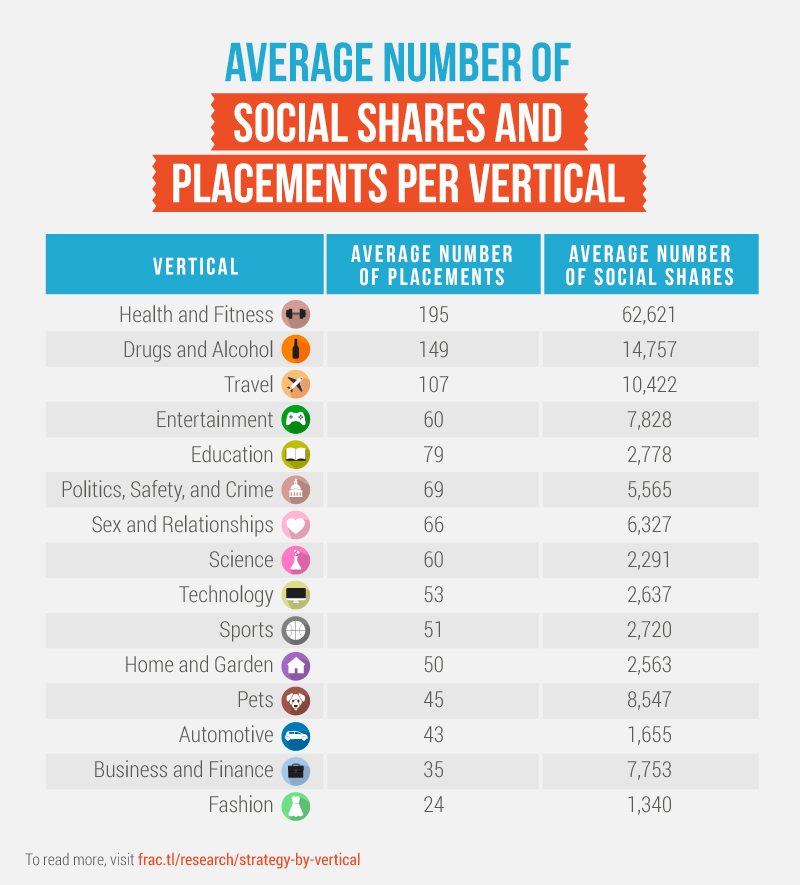 Each of the campaigns analyzed follows a data-driven research approach to content ideation and production. Beyond establishing these performance metric benchmarks, we further dissected the data sources and research methods to decipher which verticals saw the best engagement for each.

Data Journalism in Content Marketing: The Key to Engagement

But let’s back up for a moment: Why should you turn to a data-journalism approach for producing content in the first place? We’re all aware of the ever growing sea of content and the issue it presents since audiences only have a finite amount of time (and honestly shortening attention spans) to consume it. Much of the content we come across is dry, bland, unoriginal, and repetitive, and therefore fails to grab the attention of an audience overwhelmed with choices.

Quality content created with a data-journalism strategy is different, and it’s predicted to be the next big thing in marketing. Because audiences crave originality and publishers want exclusivity, content that revolves around original statistics, new findings, and unique ideas will attract more attention and often reach a broader audience. So naturally, this strategy earns media placements and social shares regardless of the vertical. Like our research revealed, however, some verticals prefer certain data sources and research methods over others, so let’s dive deeper into that.

Data Curation. Sourcing secondhand, publicly available data helps your content establish authority while allowing your brand to add value to an existing data set by simplifying the information and pulling interesting findings. Government databases, research institutions, and even social media networks are goldmines for finding such data that can be analyzed and repurposed in any vertical, however, Drugs & Alcohol; Politics, Crime, & Safety; Automotive; and Education verticals saw higher than average engagement when utilizing data curation more than the other eleven verticals.

Databases accessible to the public are a goldmine for content inspiration, and keeping an eye out for the latest studies helps keep your content timely and relevant. National governments and private research institutions offer a plethora of authoritative studies across a variety of often “dry” verticals like crime or education (which not so coincidentally happen to the be the top performing verticals using this research method.) One top performing campaign earned over 150 media mentions from national and regional publications by combining both verticals: the number of drug and alcohol arrests on college campuses.

Original Data. Firsthand research or even turning to internal data is a great way to add originality to a data-driven content ideation strategy. Procuring firsthand external data through research like surveys and field studies allow a brand to have more flexibility and creativity when finding new data to inspire a campaign. Business & Finance; Fashion; Home & Garden; Travel; and Technology verticals saw higher levels of engagement with original data more than the other verticals.

While surveys are becoming easier and faster to conduct online, going out into the field to collect samples can yield great data that sparks a lot of engagement for a campaign. For example, collecting bacteria swabs from various areas of a plane for Travelmath’s Airline Hygiene Exposed campaign yielded a promotional trifecta: the results’ element of surprise, the topic’s wide appeal, and the data’s originality. With nearly 200 media mentions, this campaign quickly earned regional, national, and international attention.

A second way to acquire original data requires arguably less leg work. Most brands are already sitting on top of a plethora of internal, proprietary knowledge and data that can easily be turned into thought-provoking campaign. From consumer habits to market research, brands can pull from their own databases to create unique content no other brand or agency could produce.

My team frequently utilizes this method of sourcing internal data in our B2B market research campaigns (like this one) and implements it for some of our B2B clients as well. Internal data, however, doesn’t always have to be strictly numbers and statistics; it can come in the form of internal knowledge and experience as well. With the goal to increase brand awareness, Alexa came to us wanting a targeted approach to reach audiences, so we helped promote a valuable resource specific to their industry: a content planning calendar. The result was over 150 media mentions from various tiers of marketing publications, an exceptional number of pickups considering the niche topic.

Most importantly, when using a data-journalism strategy in your content, it’s important to think like both a data analyst and a storyteller. The former ensures you take an unbiased approach to sourcing and interpreting the data while the latter helps you pull and discuss the most interesting information for an angle for your content. A data-savvy storyteller that can analyze Big Data to uncover a new angle for a brand’s next story humanizes information-heavy content, which proves to be key in engaging audiences and publishers. And a final word to the wise: be sure to include a clear methodology for transparency.

Ashley Carlisle is a Brand Relationship Strategist at Fractl, a content marketing agency specializing in data-driven campaigns. She works alongside a team of creative strategists producing innovative studies on the latest industry trends.