As a general rule, I’m not a fan of the term, “growth hacking”. Mostly it’s because it seems to convey some really small hack that somehow will bring about huge results – results that are almost never repeatable. But, if you want to dramatically grow your Facebook followers – then this is one growth hack that you can’t ignore.

On January 31, 2015 – we had 2,850 followers on the Dollar Hobbyz Facebook page. We wanted to grow our Facebook followers because we know that having more relevant followers can increase your engagement, your reach, and ultimately – lead to more sales. I know there’s a lot of disagreement with this lately, but if you do it right – some good audiences on Facebook can generate some pretty high returns. That’s an entirely different blog post that I will write about later

On March 31, 2015 – we had 5,839 followers on the Dollar Hobbyz Facebook page – a little more than double in just 2 months’ time. The science of how we did this was very very easy – and it was actually so cost effective that we made more money than we spent to get them.

We started doing a bunch of really great retargeting ads. The great thing about these ads are that they generated over 500% return – which means the ads were really valuable in and of themselves – regardless of getting new followers.

When you use retargeting ads on Facebook, a nice little button appears on those ads that looks like this (see image below) and clearly asks people to “Like Page”. Since I’m serving those ads to people that have already visited the Dollar Hobbyz website, they are likely to want to follow us on Facebook as well. And, since I made sure those ads were very targeted to people that liked those specific brands – they were more likely to want to like our page because we were showing them something that was very relevant to them. 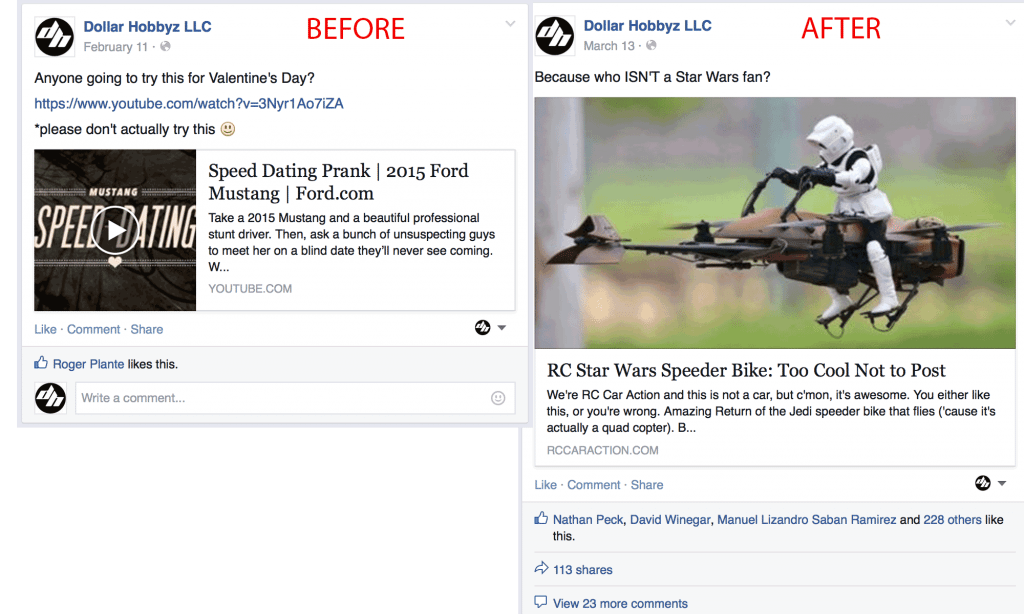 That’s it. We spent some money, made even more money, and came out with twice as many followers on Facebook. Not bad for a true growth hack. We actually got a few other benefits from this too.

In addition to making money and doubling our Facebook page likes, we were able to generate much higher engagement on our posts. Our normal posts were getting only a handful of likes, comments and shares, but after doing this we’ve been able to hit record numbers of engagement, most of which is organic, with a little paid in there to keep the momentum moving. The screenshots below showcase some of our best and worst case examples of this.

You can see the before post didn’t get much engagement on February 11, 2015. But on March 13, 2015 – the engagement was at over 200 likes, 113 shares, and 23 comments. There are a lot of other factors involved too (Star Wars is just plain cool, the image is bigger, etc) – but even if everything was identical – the engagement would still be higher with a larger, more relevant Facebook following.

What are some other great ideas for increasing Facebook followers that you’ve used in the past? Let me know in the comments below!