Everyone Has A Story To Tell 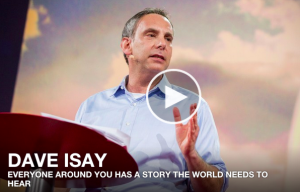 Everyone has a story to tell. This was the idea that inspired Dave Isay to start StoryCorps, the largest single collection of human voices ever gathered in history. In his TED Talk, Dave shared the story of how his inspiration came about.

When he was 22 years old, he found his calling for radio broadcasting. Around the same time, Dave also found out his dad, who he was very close to, was gay.

He was crushed by this news, and it strained his relationship with his dad. However during one of his conversations with his dad, Dave learned about the Stonewall riots, which inspired him to start his journey in storytelling.

One night in 1969, at a gay bar called “The Stonewall Inn” in Manhattan, a group of young black and Latino drag queens fought back against the police during one of the frequent police raids.

The riot made a lasting impact on the gay and lesbian community, and marked the beginning of the modern gay rights movement.

It was a story that intrigued Dave, and he set out to find out more about the people behind the Stonewall riots. With the help of an archivist, they tracked down those who were at the Stonewall Inn that night. When interviewing and recording those individuals, Dave realized the power the microphone gave him: he was able to go to places and meet people he otherwise never would have the opportunity to go and talk to.

Dave’s radio documentary on the Stonewall riots was the first time the story was told to a national audience. It spawned a feature film called The Stonewall Uprising.

The program changed his relationship with his dad, and it changed his life. Over the next 15 years, Dave continued to make more radio documentaries, aiming to capture the voices of people who were rarely heard from in the mainstream media.

During this process, Dave observed how the simple act of interviewing people had touched those being interviewed. Being heard and listened to meant a lot to these people, especially those who did not think their stories mattered.

Helping Other People Tell Their Stories

This inspired Dave to begin StoryCorps, a project to inspire and give people the opportunity to record and listen to each other’s stories. A booth was set up in Grand Central Terminal, where anyone could go in with someone they wanted to honor, to interview and talk with them about their life.

The interview was almost seen as the last intimate conversation people would have with that individual. The experiment took off, and the project eventually expanded to other cities, capturing hundreds of thousands of unheard or ignored voices, all in people’s own words.

The Power of Authentic Stories

I’ve already covered The Significant Objects Project to show the value of stories on seemingly insignificant objects. With StoryCorps, Dave found that a lot of people cry when they hear StoryCorps stories. Dave doesn’t think it’s because the stories are sad. In fact, most of them aren’t.

He thinks the real reason why people cry is because people are hearing something authentic and genuine at that moment. In a world like today’s where it’s sometimes difficult to tell if something is real or not, this was significant.

Another key take-away for Dave from the StoryCorps project was the power of listening. He believes we can all learn something new about people and the world if we simply take the time to stop and listen.

What’s The Lesson Here For Marketers?

To truly understand our customers and their needs, we need to stop selling and start listening more. Talk to them. You can even interview them like Dave did.

Taking the time to learn more about their stories and pain points will help you create more authentic and meaningful content that your customers actually want to see.

In today’s world, it’s not easy to capture people’s attention when there’s so much content being created every day, all competing for the same eyeballs. To make your content stand out and cut through the noise, you need to stop selling and start listening to your customers.

By building this one simple step into your content strategy, you can and will be able to create content that your customers want, and start building deeper customer relationships that will truly drive sales and business results.

1 thought on “Everyone Has A Story To Tell”