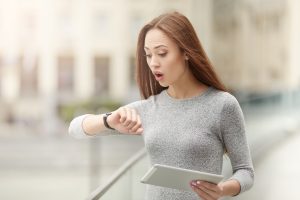 Twenty years ago, settling in with the morning paper and a cup of coffee was part of most adults’ morning routines. Eventually, that paper became non-essential as many decided the best way to stay up-to-date was to click through news on a desktop, generally at the office in between rounds of answering emails or hopping on calls. These days, there’s a 65 percent chance you’re scrolling through this article on your phone. And as our medium for accessing content changes, the content itself must evolve to meet the changing demands of consumers. As mobile replaces desktop, interactive content that gets users tapping, swiping and scrolling is a better fit than static messaging. Here are some of the ways interactive makes more sense in a mobile-first world.

With Facebook boasting 1.59 billion users and its kid sister, Instagram, coming in for a strong second at 400 million, it’s safe to say that most audiences are on social media. What’s more, 80 percent of that audience is browsing social media on mobile, according to Marketing Land. So what does that have to do with content?

The move toward autoplay video on social media means that not only do audiences expect video content, they prefer it. In fact, audiences are four times more likely to watch a video about a product than they are to read about it. But with online video accounting for more than half of all mobile traffic, it can be hard to make video ad spend count, especially on social media. Incorporating interactive content into video makes it much more likely to earn a view.

For example, British tea company Taylor’s of Harrogate recently included a quiz in its 30-second Facebook video ad to help consumers find their perfect coffee flavors. The results were even better than the company had hoped for: the simple video and quiz earned 4,400 likes, 400 shares, and 250 comments. As audiences come to expect video, adding an interactive element could be the small touch that sets one video apart from the competition.

Even reality is becoming more interactive

Last summer, Pokémon Go took the entire world by storm, proving that there’s a huge market for augmented reality, or technology-enabled alterations to the physical world, like viewing a Pokémon in the real world through a phone screen. And as Snapchat selfie filters become more and more mainstream, social media giant Facebook is already experimenting with ways to ensure brands get in on the action.

And while augmented reality may still be a little too pricy for SMBs, the trend toward augmented reality is definitely proof that audiences are expecting interactive elements in every aspect of their content, even their own selfies. In the not so distant future, we may be hard pressed to find content that isn’t interactive. According to Investor’s Business Daily, “By 2020, the coolest mobile and web experiences we have today are going to seem very flat and hopelessly boring.”

Brands that stay static may be left in the dust

In 2016, the use of interactive content took off, and that trend shows no sign of fading. But that doesn’t mean white papers and eBooks are obsolete. Quite the opposite; 65 percent of B2B marketers say white papers and eBooks are important parts of their content marketing strategies. But adding interactive content to static pieces goes a long way toward educating the buyer and can sometimes mean the difference between a standout piece of content and an effort that gets lost in a sea of similar offerings.

Just because the majority of consumers are no longer having the morning paper delivered to their doorsteps doesn’t mean they’re no longer interested in the news. Similarly, now that consumers have endless choices when it comes to content, they crave standout pieces more than ever. 2017 is the perfect time to give audiences what they’re looking for by way of engaging, interactive content.