But what does Mark Hamill (or Luke Skywalker? Or Star Wars?) have to do with Content Marketing? I’ve asked this question before and came to some surprising conclusions.

In short, content marketing can only succeed when we make our audience the hero of our content.

Mark Hamill allowed us to see ourselves in his unlikely rise to become one of the greatest movie characters of all time.

But why? What made his role and the Star Wars mythology so powerful?

The Power of The Force

Return of The Jedi came out in 1983. And in the small town where I grew up, we could actually walk to one of those old movie theaters that had a balcony.

Return of The Jedi was the first movie I was allowed to go see without my parents. My older brother and I walked to the theater. We bought some popcorn, a soda and some pop rocks.

And then we sat there in awe as the final installment of the original Star Wars unfolded.

The epic hero, Luke Skywalker, conquers evil against overwhelming odds. The tragic villain, Darth Vader, returns to the good side. And the evil emperor is vanquished.

The Power of Myth

In 1989, I went off to college and studied English Literature. After watching Joseph Campbell’s “The Power of Myth” television series on PBS the previous year, and then reading the book, I came to believe what Campbell explained.

That there was a common theme to all the greatest stories ever told. He called it the “Monomyth” or “The Hero’s Journey.”

An unlikely hero emerges from a humble background. They hesitantly go on a journey. They face threats, trials, and existential challenges that help them learn of their true strength. They overcome evil and return home forever changed.

The Hero’s Journey is so powerful because it evokes the dreams and wishes everyone feels. That we are somehow unique and special. That there is a surprising hidden power deep inside us. That we have important work to do. Work that has meaning and impact on the world around us. 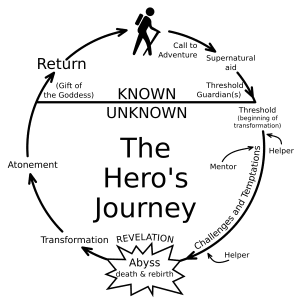 Luke Skywalker fulfills a number of the characteristics that you see in all mythic heroes. A royal lineage that he grows up ignorant about. That he has special powers and abilities that are brought out by a series of teachers.

He reluctantly leaves home on a quest that takes him over a supernatural threshold into a strange land. He is guided by a wise teacher, compelled by love for his sister, and pushed by the seemingly selfish co-hero Han Solo.

Ultimately, the hero must stand on his own, face the darkness and conquer it before returning to reality, stronger and wiser.

Luke and Han both evolve from self-centered people into crusaders against the forces of evil that threaten the entire universe.

What Does Mark Hamill Have To Do With Content Marketing? 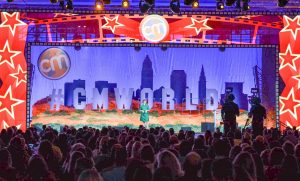 I have no idea what Mark Hamill will actually talk about in Cleveland in a few weeks.

He hasn’t run his speech past me for my thoughts.

But I do think there are a number of lessons we can learn from his character and the Star Wars mythology overall:

Darth Vader is introduced to us on the Death Star. A very dark and ominous place. The Millennium Falcon is a tired and beat up space ship that Han Solo gets started by banging on a panel with wires hanging out of it.

Star Wars starts with the way the world can feel sometimes. Old, tired, dirty, or scary. Great content starts with “what is” before moving on to “what could be.”

Han Solo is kind of a jerk. But he shows great affection for his friend Chewbacca, and serious interest in Princess Leia.

He says he only cares about getting a reward, yet he keeps showing up in key places when he is needed.

Han Solo provides a contrast to Luke’s own journey from selfishness to selflessness. Great content considers opposing points of view.

“Luke I am your Father” is one of the greatest “holy crap” lines in a movie ever. This puts Luke Skywalker on a path of redemption to love the very thing he hates the most. And it begins the journey for Darth Vader to be redeemed as well.

Let’s start with marketing itself. All marketers are on a path of redemption.

Does your company have employees who are real people with passions, pains, families and stress, dreams and desires bigger than just talking about what their company sells? Content marketing allows your employees, and partners, and influencers to share their passions and fears authentically with an audience who shares similar interests.

An audience that might become your next customer, employee, investor, or partner.

And Content marketing provides a measurable return on your marketing investment. So there’s that whole: “let’s do stuff that works thing” going for it.

What does Mark Hamill have to do with content marketing?

4 thoughts on “WTF Does Mark Hamill Know About Content Marketing?”