What’s the Essential Ingredient for Effective Marketing in the Coming Decade?

As someone who does content marketing for a living, AdAge is practically required reading. Not so much for what it teaches us about modern marketing. More so for the comic material it provides that marketing is so much more than advertising.

As I sat down to leaf through the articles one August afternoon in 2016, something unusual caught my eye.

An article – in the old school marketing industry’s bible – that questioned the validity of excessive marketing. A wake-up call that made me realize that above anything else, empathy is essential for effective marketing in the coming decade.

It was an argument that I’ve been making for some time. To see it in this legacy advertising industry publication, though, took me aback. I had to read more.

That article was Jack Neff’s superb “Are Brands Optimizing Their Marketing to Death?” As I read, I found myself nodding in agreement as I realized that here was someone – in the marketing and advertising industry, no less – that saw the same trends that I did.

His insights inspired part of a chapter in Mean People Suck. That chapter, “Our Customers Know We Suck,” speaks to marketers’ tendency to solve revenue and website traffic challenges with – you guessed it – more marketing campaigns.

In reality, as Neff points out, the “more campaigns” strategy looks to be as dated as the slick cigarette ads of the 1960s:

And – like cigarettes – too many of the same ads can cause an early demise for companies that insist on running them. I’ve used this ad in some of my marketing keynotes. It’s pure gold. And not in a good way. There’s a whole story behind this ad that is even worse. Ask me about it some time!

Procter & Gamble, for instance, discovered that when they cut back on some of their targeted Facebook ads, they experienced a
surprising outcome: their sales increased!

One of the reasons, Neff points out, appears in a recent Advertising Research Foundation study. That study revealed that if someone sees a digital banner ad over 40 times in a month, sales begin to drop. In fact, as a Key Media Solutions post pointed out, after only ten views of an ad, we become annoyed – even angry.

Who in their right mind thinks running annoying ads is a good idea? Apparently, plenty of brands.

Why? Perhaps it’s because no one inside these brands – with the notable exception of Procter & Gamble and others that have escaped the bureaucratic matrix – dares to tell the emperor that he’s buck naked.

When companies step outside of their bureaucratic mindset and embrace a more collaborative, agile view of how to do business, they leapfrog over the legacy brands that drag their feet to the ad agencies year after year.

As Stanford’s Nilofer Merchant put it, “…to consider new ideas, you have to be willing to let go of ones that no longer serve you.”

I’d take that one step further. In that process of collaboration that Merchant rightly advocates comes the need to listen to others’ perspectives. The more that collaborators put themselves in each other’s shoes – and their customers’ – the more effective collaboration will be.

In a word, empathy.

Marketing Needs to Step into Their Customers’ Shoes

When you put yourself – and your marketing team – in your customers’ shoes, you’ll look at those statistics and run as far away as
you can go from those ad agencies. You’ll do the research yourself (or outsource the research to a like-minded agency like ours) and find out who your customers are.  You’ll learn what keeps them up at night. You’ll identify what they really need.

And, after you’ve learned the answers to those questions, you’ll create content that speaks to them. Content that soothes their three-o’clock-in-the-morning woes.

Contrast that with Coca-Cola’s misstep a few years ago. Instead of replacing their chief marketing officer (CMO), they eliminated the role altogether, replacing it with that of a “chief growth officer.” (They’ve since re-hired one.)

Talk about navel-gazing. Instead of a customer-focused role (marketing, after all, involves outreach), they focused on a company-focused role (growth – about as self-serving as it gets). And now their CEO is admitting that he sees “limited effectiveness in brand advertising.” 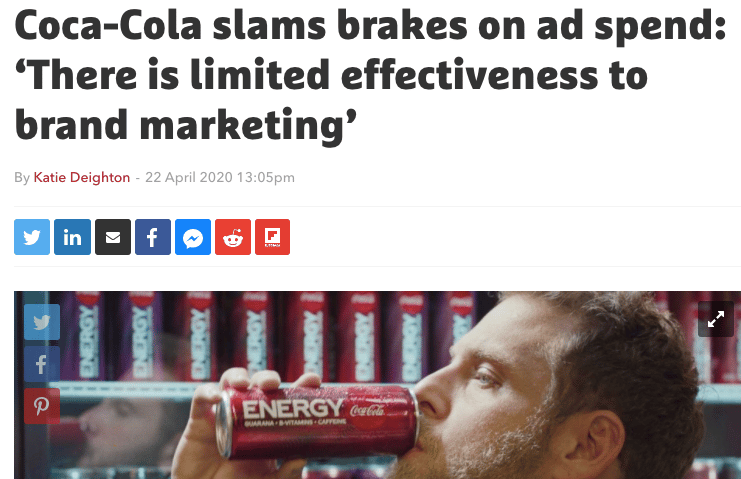 The CGO fulfilled his role to a T. At least, at first. In announcing the new role, he stated the philosophy that led to this change, “If you want people to love to drink Coca-Cola, please show in your commercial people who love drinking Coca-Cola…”

His mocking tone in criticizing the brand’s former tone wasn’t lost on E.J Schultz, the AdAge writer who reported on the change. Gwynn pointed out that the CGO role’s new direction veered off its old “Open Happiness” tagline to “re-Coca-Coliz[e]” the drink. Whereas the previous content iteration emphasized a customer benefit – happiness – the new philosophy and related content would be variations on the product-centric theme.

In fact, even during the tenure of the CGO, Francisco Crespo, the company discovered that it needed to tap into customer benefits.

Coke’s superb Ramadan ad, portraying the beverage as the perfect drink to quench the thirst that built up over hours of going without eating or drinking, demonstrated that customer benefits – the “Open Happiness” vibe – won the day after all.

The beverage giant, as it did back in the 1980s with “New Coke” – another bad management decision – overcame its misstep with the power of empathy.

Your company, too, can take the lead in its industry when it implements a more customer-centric approach to marketing.

As branding expert Derrick Rozdeba points out, on any given day, your customers are “bombarded with over 5,000 brand messages.” Of that 5,000, Rozdeba notes, only 12 get customers’ attention.

You can overcome that saturation with content that gets their attention from the first sentence to the final paragraph. “How?” you ask.

Rozdeba put it well: “Put our branding feet into the consumer’s shoes for a day.” When you streamline your customer journey by putting customers’ needs at the forefront of your messaging, you get their attention.

That messaging needs to extend into your replies to criticism as well. Though unkind comments might sting at first, they often are opportunities to make a difference – and a customer for life – depending on your response.

Use their feedback as a springboard for change. Reframe it as target customer research, and you can see negative comments as your chance to win these customers back. Who knows? If your response meets their needs, you might even get some referrals out of your efforts.

When you take marketing out of its silo and realize that it often spills over into customer service and research, your messages will be among the 12 that people notice. Now, that’s leveraging the power of empathy to make your marketing more effective.

So what do you think? Please consider picking up your copy of Mean People Suck today, and get the bonus visual companion guide as well. Or check out our services to help evolve your culture. I would be thrilled to come present to your team on the power of empathy!