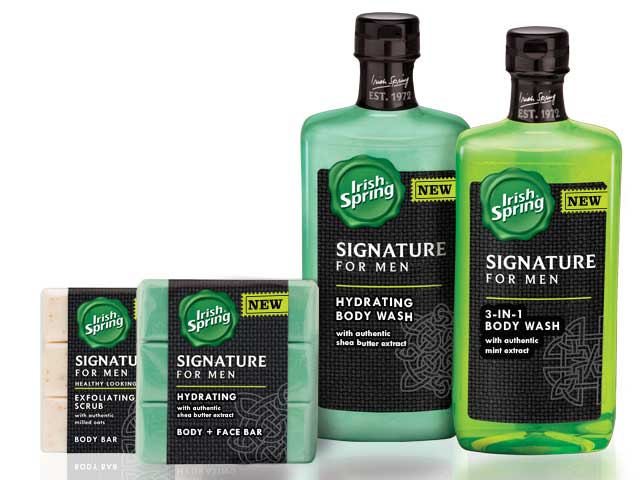 Last year, Colgate-Palmolive subsidiary Irish Spring launched a campaign for it’s new body wash.  Unfortunately, they were launching their ‘signature for men’ bodywash range into a low interest, high competition market to compete with other well established brands, therefore they needed a campaign that not only spoke to their audience but engaged them effectively.

With millennial men as the target audience, a campaign was drafted to appeal to this demographic, focusing on digital media for the mobile savvy millennial. To grab their attention and cement the brand as a premium product, Irish Spring decided to go with the mobile let campaign – “What does your signature say about you?”

This particular mobile marketing campaign utilised a custom-made mobile website featuring an integrated signature analysis tool, enabling the user to write their signature through their touch screen. Behind the scenes, a custom digital signature analysis tool (developed with an expert graphologist) analysed each signature and returned results to the user along with the opportunity to share via social media.

The campaign was well received by the public, with over 19,000 page views over 5 weeks and a bounce rate of less than 0.25%.

Acura’s social marketing campaign harps back to the days of Scalextric (or slot cars as they were also known). To stand out from the competition and deliver an engaging campaign to their audience, Acura developed custom made, 3D printed slot cars and a track designed to engage their audience online.

Acura’s marketing strategy was simple; they aimed to rekindle the nostalgia of Scalextric, prompting audience engagement over twitter whilst concurrently improving brand awareness and raising money for charity.

Each car was fitted with a microcontroller, seamlessly integrated with a live stream broadcast via periscope. Users would access the stream, back one of the two slot cars and tap the on-screen heart to make the car go faster. Each tap of the heart was converted into electrical current, propelling the car, with 5 real time cameras tracking the vehicles’ progress around the track.

Acura made a great impact with their innovative campaign, generating over 60,000 hearts (the metric that moved the cars) and raising over $10,000 towards their chosen charity.

With the campaign introducing the Acura brand to a fresh audience, their engagement over the periscope platform increased by 190%andthey were even a gold winner of the MMA Smarties award!

Multinational IT company Dell made waves in the mobile app scene this year when it released it’s ‘Play Through’ mobile marketing campaign. Designed to innovatively engage their mobile audience and increase awareness of their sponsorship of PGA’s match play tournament, Dell’s augmented reality app transformed downtown Texas into a virtual golf course.

Aiming to make a mark with their PGA sponsorship and target the elusive class of business executives, Dell was required to think past the forms of traditional advertising and connect with their audience directly. Dell considered a mobile application the most effective and entertaining method of engaging their high-profile audience, with executives invited to try out the game at Dell’s headquarters in Texas.

The game utilised the device’s gyroscope and accelerometer to let players swing their phones like golf clubs (no doubt there were a few devices flying), with the app leveraging Google maps to arrange the course and foursquare to turn local venues into hazards and putting greens, essentially the Pokemon Go of Golf!

The campaign was well received by all; with Dell’s high-profile prospects hitting a total of over 100,000 tee shots and over 13,000 holes! App store downloads were also popular with thousands of users downloading the game through their respective app stores.

It also received a fair amount of press engagement too, with the campaign receiving upwards of 9 million media impressions throughout the course of the project.

Dell’s penultimate goal though, to improve it’s position as a technology leader was indeed a success – with the brand improving it’s ‘market leader’ perception by over 30%.

Samsung – Try on a six campaign

With Apple’s iphone 6 holding some serious clout with consumers, South Korean technology giant Samsung needed a way to distinguish their brand from the competition.

With an intuitive mix of integration and digital experience, Samsung introduced their ‘try on a six’ campaign, aiming to highlight their brand dominance and increase conversions of their new smartphone. By offering users the ability to ‘experience the smartphone through their current device’, Samsung have developed a rather sophisticated and effective marketing tool.

Samsung’s ingenious campaign involved displaying a digitally rendered S6 on the user’s desktop screen, offering a 6 digit connect code to integrate the user’s current device with the S6 on screen. The integrated technology hijacked (in a completely legal way) the competitor device’s telemetry, enabling the on-screen phone to move in real time with the user’s device in their hand. Moving the device in certain motions and positions would prompt on-screen commands, showing the user what the S6 was capable of. It even displayed comparison data (where applicable) to detail the specifications of the S6 to the iPhone 6S (to convince users to convert).

The campaign was certainly successful among Apple users, with over half of all website visits coming from Apple devices, and with a 97% unique visitor rate, it was incredibly popular.

Thanks to the incredibly engaging campaign, Samsung witnessed a 14% conversion rate, miles above any of the best ecommerce stores!

With constant threat from competition, BMW needed a campaign to re-establish their dominance in the automotive market and reach the target audience of their new M2 model car. Aiming to target male drivers between the ages of 20 and 30, BMW teamed up with Victoria’s Secret model Gigi Hadid – because well, the collaboration of both car and supermodel resonated deeply with the intended audience!

The campaign was built around the game 3 cup shuffle, except instead of 3 cups, there were 5 BMW M2s and instead of a ball, there was Gigi. The viewers were prompted to ‘follow’ Gigi, and try to keep their eye on which vehicle she was in. With BMW also utilising 360-degree video technology to increase the entertainment factor.

Collaborating with Gigi was also a strategic move. With the model boasting over 23 Million followers on social media, BMW were able to leverage her user base and get the most engagement for their buck.

It definitely worked, with this unique mobile campaign far outperforming their previous 2015 Super Bowl campaign (and with a much smaller budget!)

The videos were viewed a total of 36 million times across various social media channels, with another 162 million views from Chinese social media. Translated into user engagement, BMW saw a 40% increase in mentions of their new M2 model, with significant press coverage to match.