Report: Blogs Are An Important Part Of The Marketing Mix

The proof is in folks: blogs are an important part of the marketing mix, according to Technorati’s recent “State of the Blogosphere” report.

And even though bloggers stated feeling that they aren’t treated with the same respect as traditional media representatives, it’s the buyers who had the final say. They reported in a separate study by Technorati that blogs are right up there with many traditional media in terms of importance and influence on their buying behavior.

When asked “what is your likelihood to purchase a brand, product or service from these information sources?” 42% reported that blogs influence their purchase behavior. While that is not quite at the level of “friends and family” (79%) or even “news websites” (61%), it is not far off from traditional “magazines” at 56% and “print” and “tv/radio news” both at 46%. 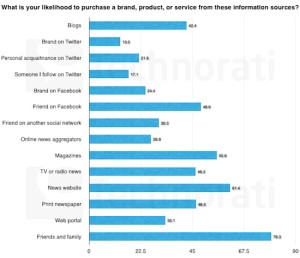 From 7,205 bloggers, the survey reports that 81% have been blogging for more than 2 years,  two thirds of bloggers are male, and 65% are age 18-44 years old. They spend on average more than 10 hours a week blogging. Demographically bloggers also have higher incomes and education levels than the general population.

According to Kit Eaton, from Fast Company magazine in his article “State of the Blogosphere“:

There’s plenty more data in there, but the headline summary would seem to be that blogging is rapidly becoming more professional, and it’s challenging the mainstream media in terms of influence over consumer spending habits. Newspaper moguls the world over: The writing is on the (status update) wall, and your paywall strategies may have to change.

Blog Topics and Technology
The main motivation for all bloggers was “meeting like minded people,” self-expression and expertise sharing according to the study. Compared to the averages, corporate bloggers main goal is to get published or get featured in traditional media. For the self-employed, blogging is a means to attract new business and new clients to their business, whereas “hobbyists” are simply looking for “personal satisfaction.”
Additionally, the  majority of bloggers are using a free third-party blogging platform, with WordPress, Blogger and Blogspot as the main platform for roughly three-quarters of all respondents.

Today I will be attending an event titled “BlogWell: How Big Brands Use Social Media” including case studies from SAP, Pfizer, Johnson & Johnson, Hershey, and Discovery Communications. The event is part of a series sponsored by the Social Media Business Council.

I will be “live blogging” the event that includes Brian Ellefritz from SAP, Anna Lingeris from Hershey,  Marc Monseau from Johnson & Johnson, Ivy Li from Scholastic, Leah Patterson from Sungard, Jonathan Haley from BlackRock, Kate Bird from Pfizer and Discovery Communications’ Amber Harris.

4 thoughts on “Report: Blogs Are An Important Part Of The Marketing Mix”