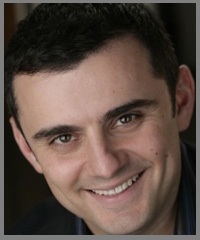 Last week I presented at BtoB Magazine’s Digital Live conference in New York on the future of content marketing.

But kicking off the event was the real star of the show, Gary Vaynerchuck  (@garyvee). It was the first time I saw him speak and he did not disappoint.

I already covered some of Gary’s ideas when I spoke about how empathy is the secret weapon to social marketing success. In his book The Thank You Economy, Gary says that it is the company who cares the most about their customers and makes them feel like they have a personal connection will succeed.

We are already starting to see advertisers consider content marketing over advertising to try and do just that: show customers they care. But Gary took this to a whole new level.

He started the presentation by claiming that his success as an entrepreneur came down to one simple idea:

Gary claims he was able to grow and beat his competition by marketing to people in ways that they want: providing information in new and relevant ways vs. just trying to promote what he was selling. He said that no one ever asked for an ad and claims his competitors were still marketing like it was 5, 10 even 20 years earlier. He stated:

I love social media because it sells stuff; otherwise, it really doesn’t matter in the context of business.

In You’re All Media Companies, Gary calls content the cost of entry to being relevant in today’s society. After a great question from a social media manager in the audience about how to scale social marketing, Gary responded:

I agree with Gary that we are all media companies and that the strength of our brands comes from the connections we make through the human stories we tell and not by employees tweeting promotional messages because their boss asked them to.

I learned a lot from the 30 minutes Gary spent on stage but there were more great insights from the conference. Here are a few of the top tweets from #BtoBLive:

57% of buyer research starts with search and #socialmedia @RishiPDave #BtoBlive

Content is the cost of entry in business. @garyvee #BtoBLive pic.twitter.com/wgWYbwvadR

If you try and control the digital environment, you are destined to fail. Embrace the chaos! #btoblive

Behind every B is a C — a human being making a decision whether they will do business with you. Target to the interest graph #BtoBLive

#BtoBlive How does a brand control social media? @garyvee: you can’t!

Looking for more traffic to your website with weekly blog articles, a full year content plan, and monthly reporting? Set up a quick call, so we can get started today…