So, it’s no surprise that companies experience social media disasters. That’s when a post with insensitive comments (mostly due to ignorance or poor judgment) goes viral and destroys your brand’s message.

Businesses aren’t usually prepared to handle the intensity of a full-scale online communication crisis. Worse yet, they may find that their response only escalates the situation.

Learn from the mistakes of others by preparing your post-disaster relief efforts. Here are four ways to help fortify your brand after the storm hits: 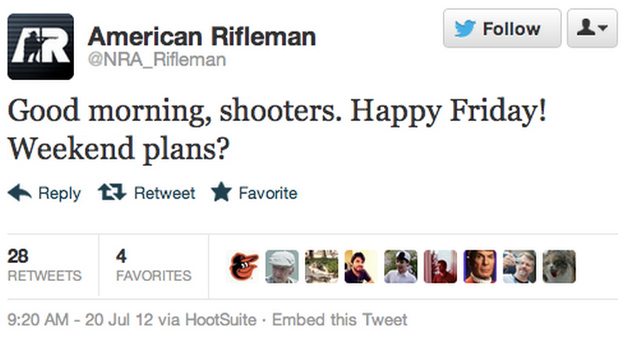 The NRA posted the above tweet just hours after the Aurora shooting.

Regardless of the cause, the key is to always remain calm.

While every second of silence seems to add skepticism, a quick reaction doesn’t outweigh a well-thought-out response. So, take the time to assess the damage and create several possible remedies.

To evaluate the situation, assemble your team. Bring in key decision makers, like the social media manager, content director, and the vice president of marketing. Teamwork will help expedite the recovery process and provide a more balanced solution.

Keep a close eye on the situation. Luckily, there are dozens of free tools available to help your team monitor the public’s reaction. Try Mention, SpoutSocial, or Topsy.

When forced to face an angry crowd, the best practice is to own up to your mistakes.

Social media has a fast-paced news cycle. But consumers will still demand answers for your blunders. So, don’t think your company can hide behind other embarrassing new stories.

Avoid getting sucked into the drama. Back-and-forth responses with an argumentative person will only reflect poorly on your business.

Deleting the inappropriate message is great for damage control. However, don’t simply remove the post without any explanation. Your followers are watching and will want a reason for your actions.

Stay away from cover-ups. It will only outrage the public and make the situation worse. No fake hacking claims, please.

Be honest with your audience and accept your mistakes.

All apologies are not created equal.

Customers don’t value apologies littered with legalese sent via an official press release. This lifeless response is rarely well-received by the public.

People seek thoughtful, heartfelt apologies. It’s all about being honest.

To gain supporters for your wrongdoings, humanize your brand. A good apology should do the following:

Be sure not to make promises you can’t keep. It’s actually better to just take positive actions.

Humor also can play a pivotal role in diffusing the situation.

After a tweet was mistakenly sent by the American Red Cross about beer and #gettingslizzered,  the nonprofit responded with some humor. 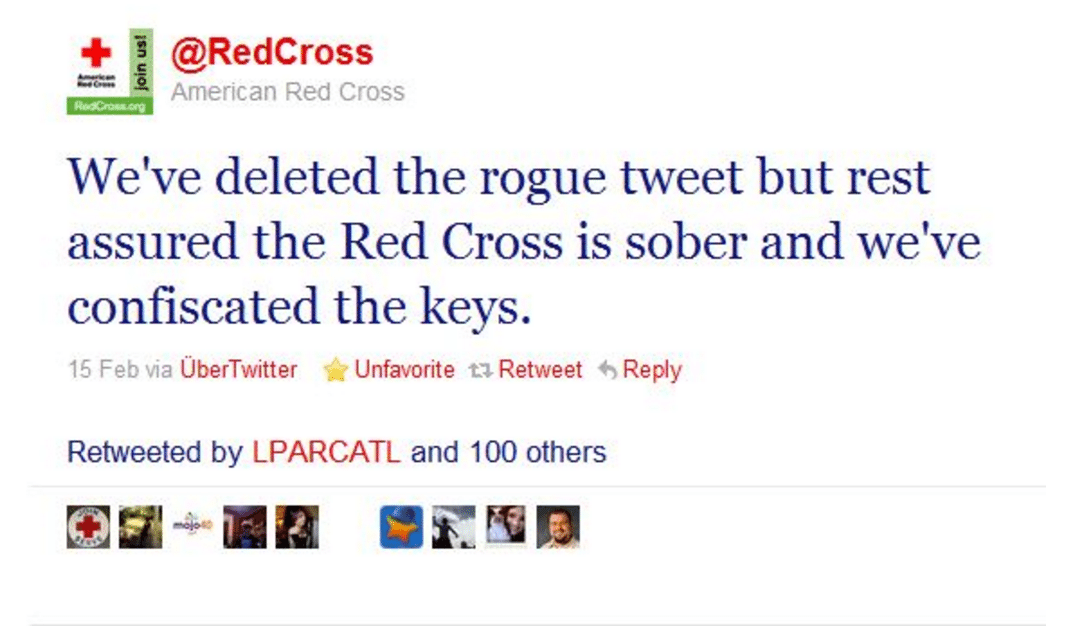 Some brands have unpopular beliefs that they are willing to standby. In these cases, be transparent with your consumers.

Explain your company’s commitment to the issue and calmly address criticisms. Furthermore, return the focus to the business’s purpose and not on the controversy.

After Chick-fil-A President Dan Cathy made a statement against gay marriage, the food chain received a firestorm of press. The LGBT community and its allies immediately called for a boycott.

In response, Cathy placed the focus back on the product by stating that “the wiser thing for us to do is to stay focused on customer service.”

At the end of the day, offer a sincere apology with humility.

Many companies survive social media disasters. And your brand can too.

Sometimes, accidents can pave the way for new growth. In other words: turn your social media lemons into brand awareness lemonade.

After Chick-Fil-A’s anti-gay marriage controversy, sales soared by 12 percent, to $4.6 billion. That’s proof that social media disasters won’t put you out of business.

Rebuild your image by asking satisfied customers to submit reviews through social media.

Consumers trust other consumers. When people notice high star ratings, they are more likely to purchase the product or service.

Sephora offers one of the best eCommerce loyalty programs. The tiered rewards program gives customers access to exclusive events and parties and a beauty studio. Plus, members get first dibs on new products.

When revamping your brand, stay away from other negative publicity. This includes distancing the company from unbeneficial partnerships. It may do more harm than good.

Be mindful that regaining the public’s trust is not a simple process and requires time. However, if you go beyond the call of duty, your team can transform critics into fans.

Everybody makes mistakes. However, not being prepared for your faults is not an option.

Take the right steps following a social media disaster to mitigate the damages. Remember to remain calm and be apologetic. With a solid recovery plan, your team can rebuild the company’s brand.

In some cases, better than ever!