12 Internet Trends You Need To Know From Mary Meeker 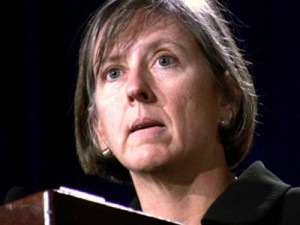 If you don’t know Kleiner Perkins, they’ve invested in some companies you may have heard of…like Facebook, Twitter, Spotify, LegalZoom and Groupon. So I think they know what they’re doing when it comes to future trends in the online world. And Mary has been nailing it each year with her analysis of the latest online trends.

Here I will provide a brief overview of the 12 trends from Mary’s presentation and a link to her presentation on Slideshare. And who knows, maybe you will be surprised at how these trends relate to the future of B2B Marketing…

1. Globalization Continues. While U.S. based companies continue to dominate, Chinese, Russian and Japanese companies are not far behind. Apple, Facebook, Google and Amazon take the top spots in market capitalization but China’s Baidu and Tencent and Yahoo! Japan have all cracked the top 10. In 3 years, China added more internet users than exist in the U.S. The biggest gainers are China, India, Russia, Nigeria and Iran. And we’re starting to see start-ups like Soundcloud and Spotify from Europe invade the U.S. market with success.

2. Mobilization. Smartphone adoption passed Feature phone use last year in Europe, in Q1 in the U.S. and will continue across the rest of the world. This combination of mobile and access to the internet is changing the world. And mobile still has a long growth trajectory in front of it before it reaches expected worldwide adoption. And this will affect everything from apps to search to advertising to social networking.

3. Sound. (Audio-ization?) Thanks to Apple’s Steve Jobs and Siri, Mary predicts audio-directed controls, speech-recognition and other audio technologies to be the next big thing.

4. E-commerce. Online retail sales declined less than the all retail spending in the downturn and is growing faster in the recovery. But at only 8% of all retail sales, and with the additional growth of mobile shopping, e-commerce has a way to go.

5. Online advertising. Mary’s prognosis for this industry is strong based on the gap between ad dollars and time spent online and on mobile devices. She predicts this is a $20 Billion opportunity in the US alone.

6. Content. Well you all know this subject is near and dear to me, but I was thrilled to see it covered by Mary as well. She talks about how the value of undifferentiated content is approaching $0. She also shows that Google revenue alone is about to surpass all US Newspapers combined revenue. The takeaway: as content becomes a commodity, the value is moving from those who create content to those who curate and aggregate it. (Shameless plug: I hope this is a good sign for my Business 2 Community site!)

7. Technology Evolution. Mary shows that the with mobile computing, we are going through a “once-every-10-20-years” technology  evolution. She also takes the opportunity to give the USA credit for leading this charge with ownership of the mobile operating system market as well as with the combination of form and function as evidenced by Apple’s iPhones and iPads.

8. People Empowerment Through Mobile is 21st Century Mega Trend! The examples are everywhere from the Arab Spring to the rapid dissemination of information during the Japanese earthquake and the death of Osama Bin Laden. But the statistic that really shows the opportunity: there are more people worldwide with access to wireless signals than electricity!

9. Authentic Identity. With the rapid rise in the use of social networks, profiles and the privacy issues they bring, it is getting increasingly difficult for people to hide. While there are obvious issues with bad pictures from a late night out or complaints about your employer, there are also more subtle issues to consider such as how much infromation to share and what should be made public.

10. Economic Uncertainty. There is tremendous uncertainty, a lack of consumer confidence and lots of cash on hand at corporations who are waiting to see how the economy deals with the after effects of the last recession. There are no clear signs on where the world economies are going.

11. US Economic Challenges. Mary shows data that demonstrates the U.S economy is spending too much and not generating enough revenue to support it creating the biggest peacetime gap between revenue and expense ever. This places the U.S. market in the 10th worst position in the world (after debt-ridden Greece, Ireland, Italy).

12. Closing: Time of Opportunity. Mary says that depite the economic uncertainty, we know what we need to fix. And despite these issues we may be living in the most innovative time in the history of technological innovation.

And here you can view Mary’s presentation in Slideshare: