Is Influence The Moneyball of Marketing?

We all love a good list. Last week Forbes released their annual list of most powerful celebrities. Earlier this year, Forbes also gave a rundown of baseball’s most valuable teams.

Another thing we love is sports analogies. The sports analogy is often used in business to emphasize goals, strategies, obstacles, personal motivation and teamwork.

Why? Because sports are a relatively common experience across many cultures. People understand sports at the basest level.

The power of sports is strong at the societal level as well. The ancient Greeks used the Olympics to keep a truce among their warring city-states. A majority of the planet slows down to watch the modern Olympics, the World Cup and the Super Bowl in the U.S.

This power also translates into the corporate environment as we implore our teams and our customers to achieve their objectives. Score a goal. Drain a three-pointer. Dunk it. Go long. ”Just do it.” ”Run like never before.” Win!

So if sports has such a strong hold over us, who influences the business of sports?  Do we even understand the power of influence?

So inspired by the top earning athletes report, I sought to understand the power of influence, to see how easily I could define the top 10 influencers in the business of sports. I’m not sure I answered the question to my satisfaction, but the journey offers some insight into the power and the challenge of identifying influence in our social world.

If you’ve read the book or watched Moneyball, you know the story of Oakland A’s general manager Billy Beane’s strategy to master the business of sports by fielding a superior team on a basement budget.

If you haven’t read the book or seen the movie where Billy is played by Brad Pitt, the hero uses advanced analysis and lots of stats to acquire players that are simply more effective but that other teams ignore based on irrelevant personality traits.

The approach works. The team makes it further in the playoffs than anyone expects and Billy Beane is offered a lucrative position at the Boston Red Sox. While he declines the offer, his approach is widely studied and copied by Major League baseball in the years that followed.

Billy Beane has influenced the business of sports by solving one of the biggest challenges in business: a focus on results at the expense of personal bias.

Is Influence the Moneyball of Marketing?

While Moneyball offers a best-selling, hollywood-produced answer (based on a true story), I wanted to understand which type of advanced analysis helps us to identify the top influencers in the business of sports.

But first I had to define influence. Altimeter analyst Brian Solis (@BrianSolis) and author of a book titled Engage defines “Influence: To cause effect or change behavior.”

He believes that influence is one of the hottest trends in social media and argues that effectiveness for marketing in the digital age comes down to therealization of influence. And a whole business has sprung up to measure influence and help us to “realize” it.

Mark Schaefer (@MarkWSchaefer) points to this in his new book Return On Influence: The Revolutionary Power of Klout, Social Scoring, and Influence Marketing.

Mark once told me that he wrote the book to explain to people interested in marketing, social media and influence that great content wasn’t enough. You need influence to help spread ideas.

In his book, Mark explains that companies like Klout and Kred are developing complex algorithms that attempt to standardize social influence by evaluating individual social activity. Mark points out that these approaches should be watched and understood because they are being used to measure each one of us whether we like or not. And they may hold the key to achieving a measurable return on marketing.

Influence is Not a Popularity Contest 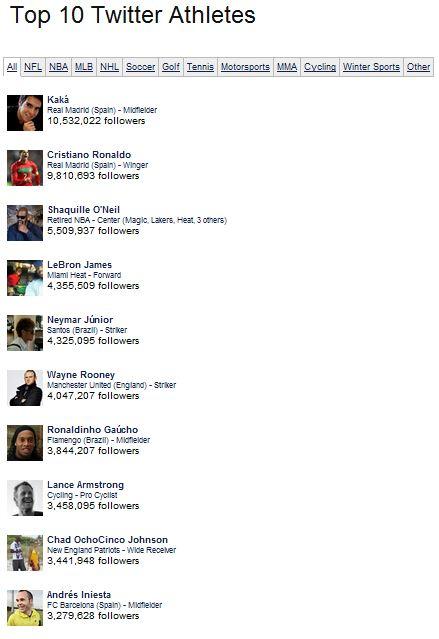 I also found these Most Influential Athletes based on Klout 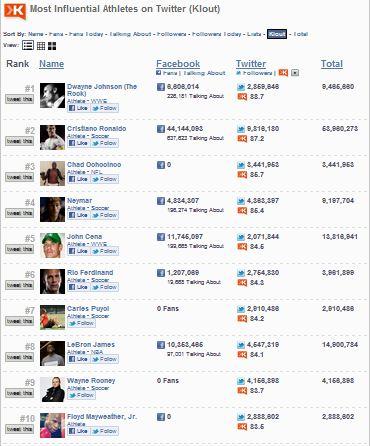 But these are really just popularity contests. These are people who have earned a following but it is not necessarily reflective of influence at all, on any topic, even in their own sports.

The Three Rs of Influence

In order to help me understand who is influential on our particular topic, influencers in the business of Sports, I reached out to Courtney Vaught, who is Director of Social Strategy and Marketing at a company calledTraackr (@traackr).

According to Courtney, Traackr locates individuals wherever they publish online and ranks their influence in a specific conversation based on a proprietary scoring algorithm. To derive an overall influence rating for individuals, Traackr uses three metrics: Reach, Resonance and Relevance:

Courtney also expained that what makes Traackr different lies in third R:  Relevance. She said that Traackr defines influence based on the context in which someone is influential. “Justin Bieber has a high Klout score,” she said, “but he would never be considered influential in cloud computing.” Traackr attempts to add context to their score with relevance on a topic to uncover someone’s influence.

Top 10 Influencers in The Business of Sports 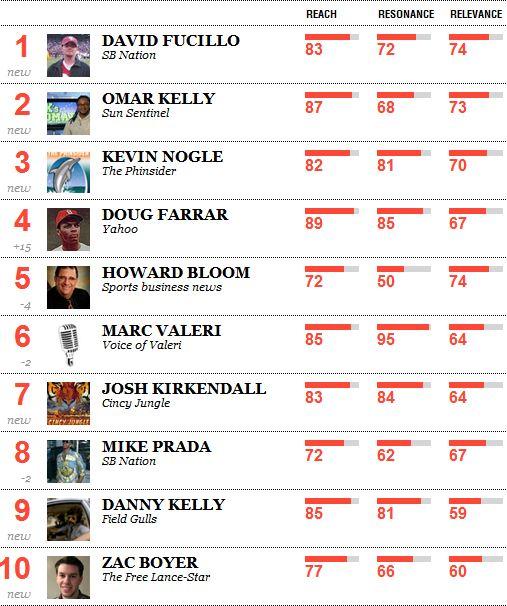 We all love lists and we are all influenced by something. In business, we love to use sports analogies. In this exercise of trying to understand what influences that which influences us, I learned that we are all being tracked and scored and judged. There are many methods to defining influence. But I’m not sure there is a Moneyball secret to success.

I agree with Brian and Mark that influence is important – maybe one of the most important trends in marketing. And that in order to reach our target audience we have to understand what influences them.

This article originally appeared on Forbes.

10 thoughts on “Is Influence The Moneyball of Marketing?”