Are You Marketing Like Groundhog Day? Bill Murray’s Advice For Brands 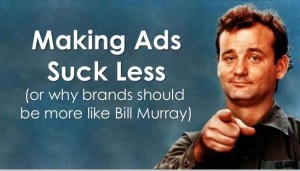 This Sunday is not only Superbowl Sunday, and the day we get to see all those expensive ads, it is also Groundhog Day.

Here in Pennsylvania, that is kind of a big deal. Maybe even more so since we’ve had 2 or 3 “polar vortex” events and a whole bunch of snow in the last month. So trust me when I say that we are all looking for an early spring.

But while the day itself has little or no meaning at all in reality, it does remind me of the great 1993 Groundhog Day movie with Bill Murray. In the movie, Bill plays a weatherman who has to live the same day over and over again until he gets it right. Check out the trailer here:

About 2 years ago I started using one of Bill Murray’s lines from a different movie to express what I thought was the feeling by most people that the majority of marketing stinks.

But I found that even though I was implicating all of us in marketing, audiences generally tend to not love it so much when you insult them.

So I moved to a different approach of demonstrating the point. And then just last week . . . I saw this article from my friend Jesse Noyes over at Kapost.

Apparently, that turned into a Reddit “ask me anything” session Bill participated in to promote an upcoming film.

Bill was asked “should brands be more like Bill Murray?” His answer:

Well I don’t know if brands should be more like Bill Murray, but there’s no question they should suck less. I think if you just hold that (thought) in front of yourself, like a marching brand trumpet player has the music mounted on his trumpet, about how to make ads suck less, then that will inform your daily life. It will be the last thing you think before you go to bed, and the first thing you think about in the morning, and you will add up the cumulative data of which ads are bearable to you, which ads you respond to. Ads aren’t bad in themselves. It’s just the attitude. We all have to go to the store, we all have to have groceries, but there’s a way to sell you things to make the exchange more of a human one…

Are Corporate Websites Dead? Does most marketing stink? Please join me and my winter blues by sharing your thoughts in the comments below. And please follow along on Twitter, LinkedIn, Facebook  and Google+ or  Subscribe to the B2B Marketing Insider Blog for regular updates.

7 thoughts on “Are You Marketing Like Groundhog Day? Bill Murray’s Advice For Brands”