Why Storytelling Is the Secret Weapon for Great Product Marketing

In 1942, Fiorello La Guardia, the mayor of New York, organized a sudden citywide raid. All at once, he sent his police officers throughout the boroughs. They busted into bars, lounges, gambling parlors, and clubs to confiscate some specific items that La Guardia was after.

And then the mayor ceremoniously destroyed these items. With a sledgehammer.

What was this contraband that Mayor La Guardia hated so much that he not only banned it, but personally smashed it? Was it drug manufacturing equipment? Weapons? Anti–La Guardia propaganda?

Nope. They were pinball machines.

That’s not the end of pinball’s story, but before we get back to it, let’s look at another story about another machine: The magnetic resonance imaging machine, or MRI.

A few years ago, General Electric assigned Doug Dietz, one of its top product designers, to bring its MRI machine into the twenty-first century.

These lifesaving machines are big, bulky, and expensive contraptions that help doctors see inside someone’s body. GE spent tens of millions of dollars on the redesign. Dietz turned the old, boxy machine into a sleek, donut-shaped device that looked like it belonged on a spaceship. It was energy efficient and more advanced than anything on the market.

As the company started rolling out the improved machines, Dietz visited a hospital to see how patients were responding to the new design.

What he saw made him want to cry.

He saw the doctors take a tiny child into the MRI room. Meanwhile, the kid was in tears. “Mommy, mommy, please don’t make me go into the machine again.”

Dietz realized something that hadn’t occurred to him during the design process. To a little kid, an MRI machine is terrifying. You walk into a bright-lit room where strangers strap you to a board and slide you inside a hole for half an hour—all by yourself. There’s a needle in your arm, loud clanking noises, and dire warnings about how you need to hold still or they’ll have to do it all over again.

GE’s new MRI, though beautiful and energy efficient, was no exception. It was a scary experience.

Dietz was crestfallen. He realized that some of the patients who he cared about the most—the vulnerable, sick kids who his machine might help save—hated his creation. Would he have to go back to the drawing board to make a new one that wasn’t so terrifying?

As Dietz considered the millions of dollars another redesign might cost, he was struck with an idea.

What if instead of making a completely new machine, they turned the current machine into an adventure?

What if the night before a little girl went in for an MRI, her parents read her a storybook about the pirate adventure she would go on in the morning? In the book, she’d meet Marcela the Monkey and Tina the Toucan, and all of her new friends who’d be waiting at the hospital. And then when she went to the hospital the next day, what if the doctors and nurses were dressed as characters from the book? The adventure from the book would continue in a role-play in the hospital, culminating in the part where she had to get on the lifeboat to drift past one of the pirate ships and get to her friends.

This part would, of course, be the actual MRI scan. But the child would experience the scan as part of a story, while staring at pictures of her pirate adventure friends on the ceiling of the scanner. And she’d have a really good reason to lay still—so the pirates don’t catch us!

It turns out that painting an MRI machine to look like a pirate ship is a lot cheaper than designing a whole new one. The GE team trained doctors and nurses on their pirate adventure plan and turned the MRI experience from a terrible ordeal into a riveting adventure.

And the most wonderful part is this: Kids went from saying, “Mommy, please don’t let me go into the scary machine again!” to “Can I go again?”

Stories have a huge impact on the way people decide what products to buy. Scores of studies show that today’s consumers are more likely to do business with companies that develop their products thoughtfully and ethically. Most middle-class consumers would rather buy something with a positive or interesting backstory, even if it’s a little more expensive. We like to know when our coffee is harvested by families in Ecuador who care about the environment and are paid fairly. We’ll pay more for the basketball shoes that Lebron James codesigned than ones created by some anonymous designer.

For instance, Shane was recently in the market for a nice watch. He’d never owned a watch that cost more than $20, so for his birthday, he decided to splurge and buy himself one for a few hundred. When he started looking, he remembered a brand called Shinola whose story he had heard a few times.

Shinola was founded in Detroit when the city was having a really hard time. Thousands of manufacturing jobs were moving overseas. Wealthy and middle-class residents were moving out, turning parts of the city into ghost towns. Crime was high, buildings were abandoned, and infrastructure was crumbling.

Shinola’s mission was to bring manufacturing jobs back to Detroit by retraining bereaved auto workers and factory employees to make bicycles and watches. They wanted to make solid, quality, American products that were worth paying more for, and that put food on the table for hard-working Detroit citizens.

Remembering this story, he checked out Shinola’s watches. They were awesome. Substantial, and a beautiful product. And bonus: Buying one would make him a small part of the story of Detroit’s revival that Shinola was telling.

So he bought one, and he loved it so much that he bought a matching one for his best friend’s birthday. (So cute, we know.) Then when Shinola started manufacturing turntables, he bought one of those, too.

Shinola’s products are great, but their story is what got him to try them in the first place.

And this brings us back to pinball.

After three decades without pinball, the game suddenly roared back to life in the 1970s, 1980s, and early 1990s. The reason? Star Wars.

We’re only half-kidding. While America lined up for Jaws and Star Wars and Indiana Jones, pinball machine makers came up with an idea: Why not incorporate these popular stories into pinball games themselves? The games started featuring artwork from popular movies and TV shows and musical acts. You played as your favorite characters or you played to fight or rescue them.

Suddenly pinball machines were everywhere. Geeky kids proved to the world—on camera—that pinball could be more than a game of chance, and the political campaign against them evaporated. Movie buffs soon lined up to relive their favorite films in pinball form, and the pinball industry boomed. (Fun fact, the best-selling pinball game of all time was created during this era: The Addams Family.) By incorporating stories into the product, pinball makers gave consumers a lot of reasons to play pinball, even though it was always pretty much the same game. 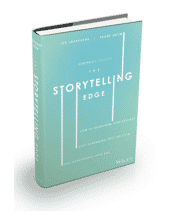 This is an excerpt from the Amazon #1 New Release, The Storytelling Edge: How to Transform Your Business, Stop Screaming Into the Void, and Make People Love You” by Joe Lazauskas and Shane Snow, available today.