How to Track the Elusive B2B Influencer

A year or so ago, MarketingProfs ran an article about influencer marketing which contained an interesting footnote: while 55% of B2C marketers were running an influencer program, the number on the B2B side was only 15%.

With so many B2B products being consideration-heavy purchases, requiring the buy-in of a range of people within an organization, B2B marketers could be making better use of Influencer partnerships to get their products on the awareness, engagement, and purchase path.

But why are B2B influencers harder to find? As Cox Communication’s marketer Martin Jones told TopRank,

“B2C marketers look for influencers based on popularity and reach, whereas B2B marketers focus more on experts, authority, and thought leadership.”

Experts, authority, and thought leadership. Much subtler characteristics that make the B2B influencer a much more elusive critter.

With B2B influencers, it’s a composition vs reach story. While there certainly is an upper-echelon of recognizable B2B influencers – they speak at shows, they have blogs, they write books, and they do have relatively large followings — the real B2B influencers are those literally connected with the buyer’s journey. And, since people follow people similar to themselves, the audiences they create might be small but could be very powerfully connected. True influencers in the original sense of the word.

So, if you’re with me so far, then you might imagine that I spent some time wondering about how we could make B2B influencers more findable. We needed a sorting hat that would at least create a pool of potential B2B influencers. I developed a reasonable hypothesis-path that goes like this: If B2B trade shows attract potential B2B influencers and, if many shows have unique hashtags, is it not likely that those who comment on show content – even if it was just a random retweet – were self-selecting themselves to be potential influencers?

To test out this hypothesis, I started what has become a multi-year journey tracking social activity at B2B trade shows. Now, with more than 600 shows being tracked across 4 market segments (marketing, technology, media, and automotive), I thought it might be interesting to share some of the results. For much of this information, this is the first time it’s been seen.

Observation 1: Most B2B People Have Very Few Followers (but more than the average)

To assess followers, I combined the numbers reported by Twitter, Instagram, and YouTube when those numbers were discoverable. Of those with more than 5,000 followers, a full 70% are followed by between 5,000 and 20,000 other accounts. You can see by the pie chart that the vast majority (86%) have between 5K and 50K followers. 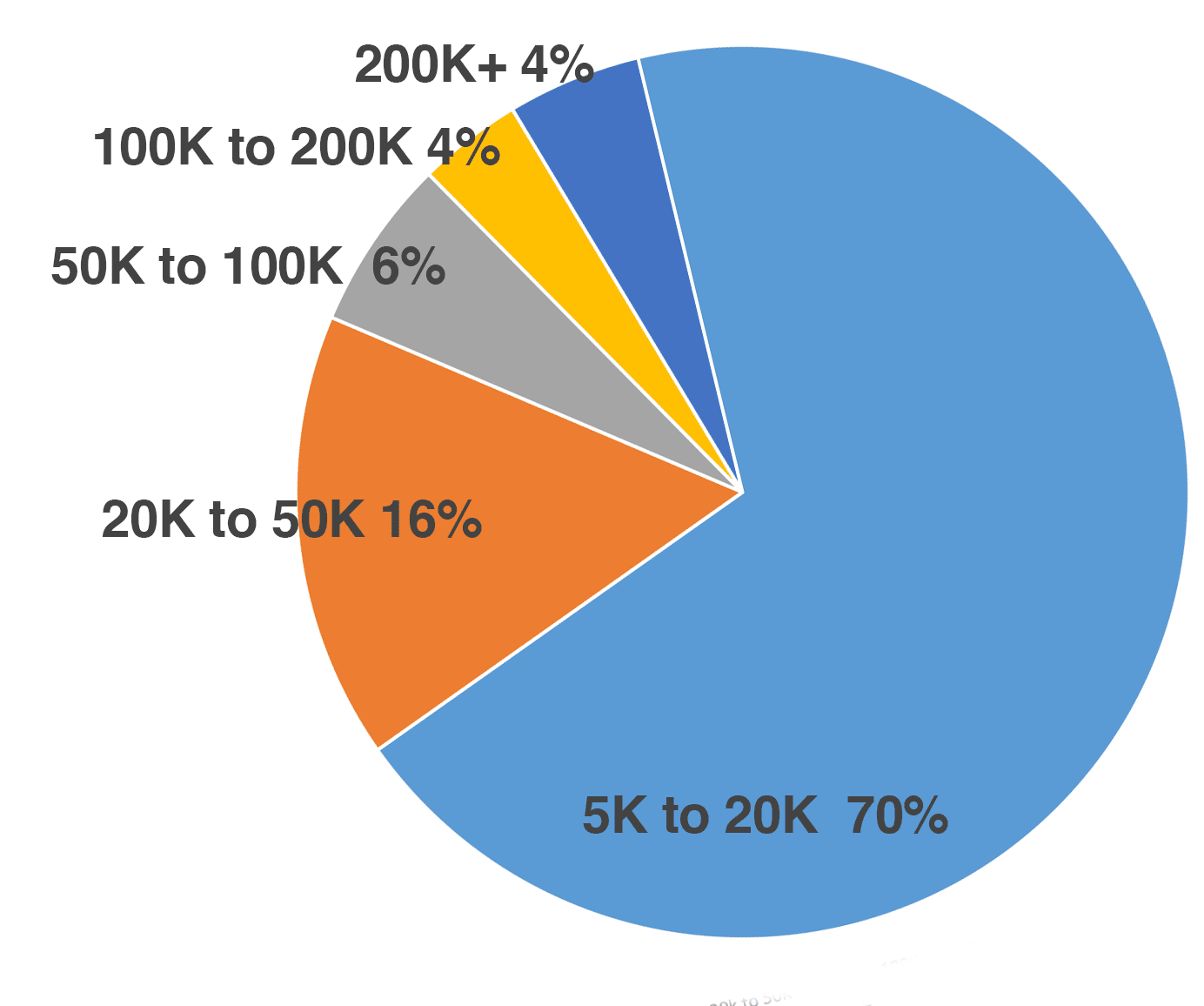 What you can’t see in the pie chart is that this data excludes accounts with less than 5K followers. That’s because 93% of all accounts tracked had fewer than 5K followers. That notwithstanding, the average followers per user of this data set is over 4,000 followers, significantly more than the overall Twitter average of 707 (2016 data). Adjusting the Twitter number for growth, it’s still nearly double.

One characteristic of potential influencers is that they engage in multiple social platforms. Of accounts with between 20K and 200K followers, 25% were found to have Instagram. Overall, those in this category had far more Instagram followers than Twitter followers by a ratio of 1.63 to 1. This same group of users (20K to 200K followers) also showed participation in other social media outlets. These include: Facebook (57%), LinkedIn (29%), YouTube (29%), Pinterest (12%), and iTunes (5%). Having multiple social outlets is important because it gives a potential influencer various channels to reach the audience.

I excluded the 200k+ category in all this data because eyeballing that list shows that the vast majority of accounts with 200K+ followers are company/brand accounts. It’s pretty easy to differentiate a brand from a person by looking at the account, but much harder to programmatically ascertain whether a social account is a brand or a human. I built an app which randomly selects accounts so I could tag them as brand or human. With nearly 1,683 accounts manually reviewed, I can say this: 42% are humans and 47% are brands (margin of error 3%, confidence rate 95%). The remaining were either blacklisted because they were clearly spam or it was not possible to ascertain.

You can get The 2018 B2B Trade Show Hashtag Report (use promo code 2018-free to bypass payment) here.