Hey, CMOs, This Just In: Digital Marketing Is Now Mainstream

I have to admit I cringed somewhat at writing the title to this post. It is of course sarcastic (one of my specialities) but what made it cringeworthy is not the fact that I was being sarcastic but the fact that I had to write it in the first place… and know that it would not be taken sarcastically by a great number of marketers.

In other words, far too many marketers will read this headline and say, “Oh yeah, marketing is digital after all.”

My title is actually a paraphrase of something Yvonne Genovese, group vice president at Gartner said in speaking about the findings from Gartner’s 2015-2016 Chief Marketing Officer (CMO) Spend Survey, which were released last November. What Genovese said verbatim was:

There is little doubt that digital marketing is now mainstream. Marketers no longer make a clear distinction between offline and online marketing disciplines.

Here’s some of the highlights starting with the 98% of marketers who say that offline and online marketing are merging, hence the mainstream status. 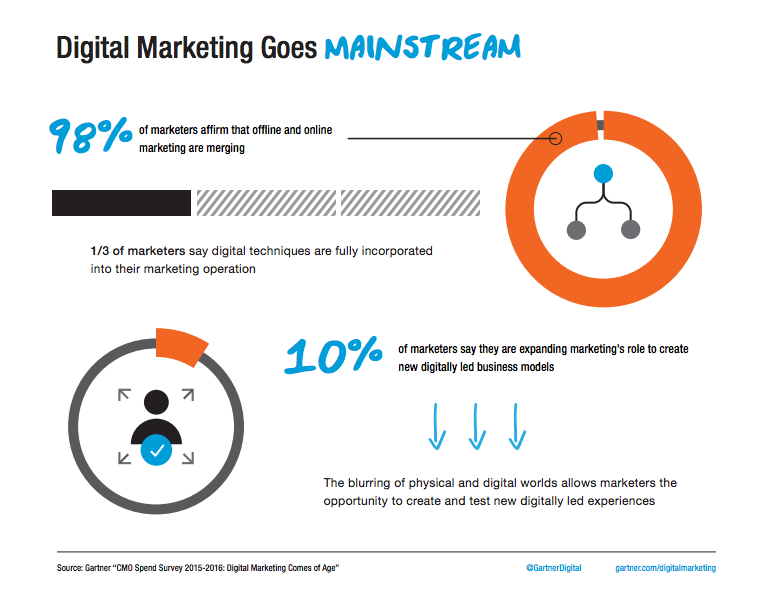 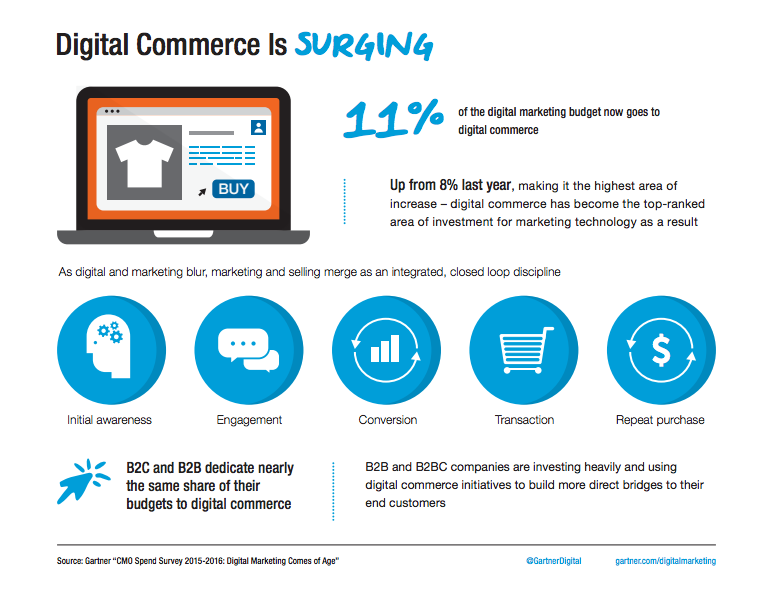 I caught up with Gartner’s Jake Sorofman, who worked on the survey and subsequent paper with Genovese and Anna Maria Virzi. I wanted to get his take on all this starting with the indications that yes, Viriginia, ours is a digital world. I also wanted to know why customer experience (CX) went from the No. 1 priority last year to No. 4 this year.

Steve Olenski: According to the survey, the amount allocated to Digital Commerce increased 3% YOY from 2015 to 2016. Do you think that is merely another sign of the digital world we live in and that the percentage will only continue to increase?

Jake Sorofman: It’s definitely a sign of the world marketers live in. For CMOs, more than ever, it’s all about making the cash register ring. We’re seeing digital commerce spending priority surge because of this heightened need to connect marketing investments with attributable outcomes, which is something digital commerce uniquely affords.

We’re seeing new digital commerce initiatives for retailers with multichannel ambitions; for B2B2C companies looking to get closer to end customers; and we’re seeing a lot of interesting innovation in the area of commerce experiences, where content marketing and digital commerce merge to create rich shoppable experiences that blur the lines between what is content and what is commerce.

Olenski: In terms of P&L accountability 73% of CMOs say they already own or share P&L responsibility with another 18% saying the will over the next two years. This to me, speaks to CMO desire to have a seat at the big kids table in the boardroom. I would imagine this could be looked on as a challenge by some CMOs or an opportunity by others. What are your thoughts on the role the CMO when it comes P&L?

Sorofman: You got it. Owning P&L makes most sense when the CMO also owns the digital commerce channel. But even when it’s shared, it signals a level of accountability, transparency and a desire to run marketing like a business—with a clear line of sight from investments to outcomes.

Olenski: “Last year, customer experience was ranked 1st. This year, it is the 4th overall priority.” That is directly from the report and I have to tell you this finding absolutely floored me. I cannot understand why CX would move down at all, let alone from No. 1 to No. 4 in the span of 12 months. What do you chalk this precipitous drop up to?

Sorofman: Oh, you noticed that. Yes, this one surprised a few people. But it’s not all that surprising, if you think about it. Remember: This question asked about increases in spending priority. Last year, we saw a surge in CX spending. This year, we’re seeing those investments put to use. There’s often a harvest phase after a spike in spending.

But we should also acknowledge the elephant in the room: CX is a very broad topic and it’s difficult to categorize from a spending perspective. There’s likely CX spending implied in several other categories we’ve reported on. What it doesn’t mean is that customer experience has somehow lost importance.

Olenski: While I was not surprised to learn that 80% of companies have a chief marketing technologist in title or role equivalent, I was surprised to see just 33% of marketing budgets go to technology. To me this could be a sign of companies staying with their legacy systems — “if it ain’t broke, don’t fix it” kind of mentality but the problem is it is broken yet they don’t know it. Or they don’t know what options are out there. What’s your take on this?

Sorofman: A third of the marketing budget translates to a lot of money. For a $1 billion company, this means, on average, about $36 million in technology spending, which is roughly equivalent to headcount expense. This budget allocation has been relatively consistent over the last few years.

For me, I was thrilled to see that 71% of marketers have an innovation budget (albeit it accounts for just 10% of their overall budget) and among those that do, one in three say they are piloting or implementing such things as virtual assistants, augmented reality and digital marketing hubs, among others. 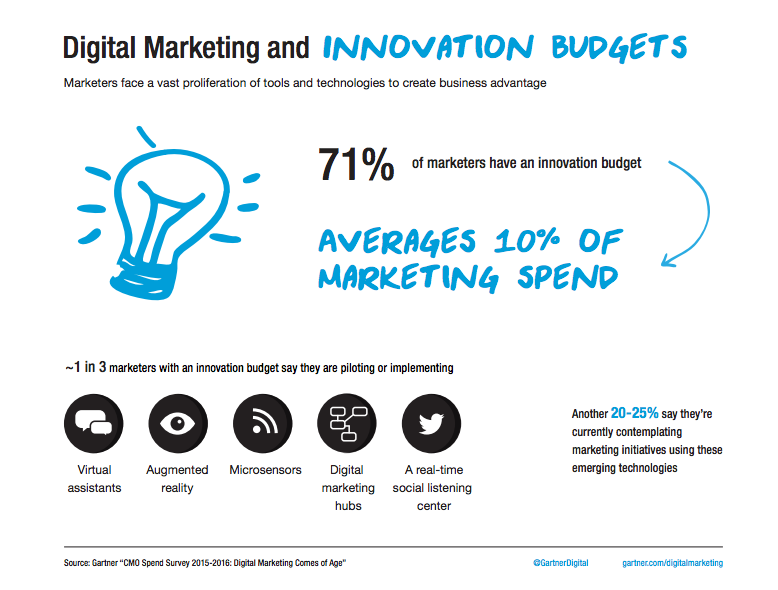 1 thought on “Hey, CMOs, This Just In: Digital Marketing Is Now Mainstream”