It’s a common scenario in the business world. The head of marketing is tasked with modernizing the marketing strategy but with limited to no budget or resources to do so. While some see may see it as an impossible challenge, I saw it as an opportunity. And it resulted in one of the highest ROI-producing programs my last company ever saw.

This scenario is exactly what happened when I was asked to take on the job as SAP’s very first Vice President of Content Marketing. In May 2011, SAP’s CEO Bill McDermott walked on stage at the company’s annual customer conference. He opened with inspiring stories of innovation from well-known brands that also happened to be SAP customers, saving any mention of specific products for last. That day, he made our customers the heroes of the stories he told, as my friend Ann Handley loves to say.

A few weeks later, McDermott asked his marketing leadership team why these stories of technology-driven innovation and thought leadership were not represented on SAP’s website. The only information he could find was about the company’s products.

His questioning resulted in him challenging the marketing team to change how we spoke to our digital audience. The task ultimately fell to me. And uh, of course I accepted that challenge to move SAP from a product-centric to a more customer-centric company through inspiring, informative, and useful content.

McDermott may have issued the challenge, but the resources that were immediately available to me were scarce. I had no team and no budget. What I did have was high expectations to deliver results.

Even more so, I quickly realized that SAP marketers strongly resisted efforts to change our approach at the time. Executives and marketers alike protested, saying, “Our job is to sell software. Why would we publish content that doesn’t directly sell?”

The first year was a challenge. My very first step was reaching out to inspiring change agents like Joe Pulizzi and Ann Handley and Andrew Davis – people who really guided my thinking and helped give me the courage to fight on.

I had to negotiate, form partnerships, and make compromises to launch the company’s first content marketing site, which at the time was called SAP Business Innovation (now SAP Digitalist Magazine). I realized the only way to make the initiative successful was with intensive research and some storytelling. I knew I would also need to present a strong business case, and communicate strong ROI measurement. 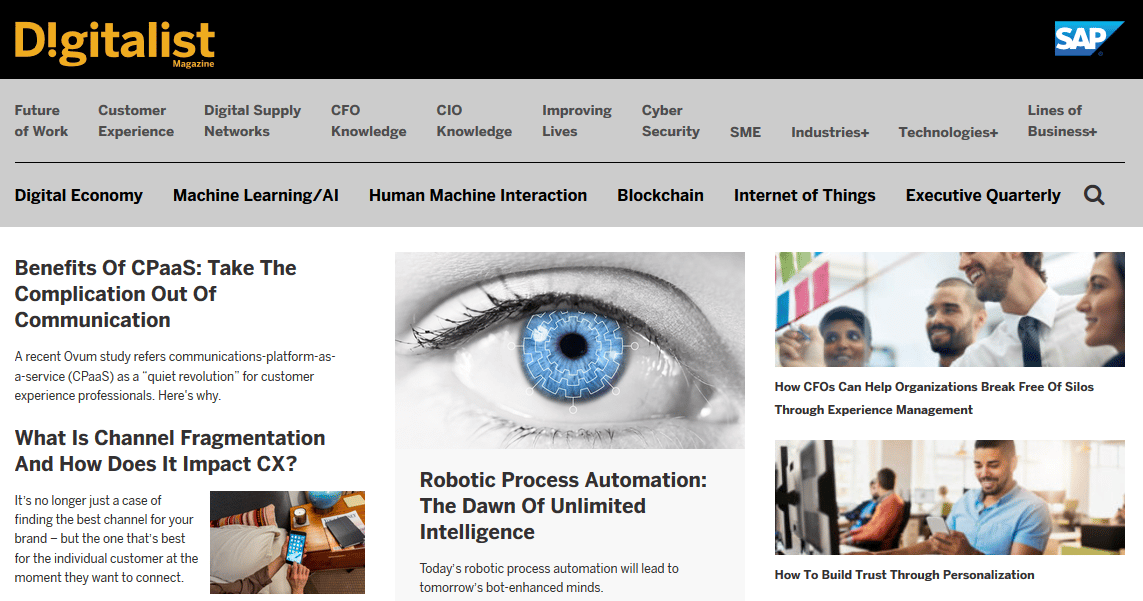 Through this process, I identified what I later called The Content Formula which helped me eventually to gain alignment, support, budget, and proof of the business value of a customer-driven content marketing strategy.

At first I turned to web search data. I discovered that there was a significantly larger digital audience using early-stage, unbranded search terms such as “big data” over SAP product terms like “HANA.” Analogous to the traditional sales funnel, this discovery meant there are many more early-stage prospects just starting their buyer journey rather than late-stage prospects.

When I looked at SAP’s analytics, I realized that almost none of the early-stage, unbranded searches were reaching the company’s website. When early-stage prospects searched questions such as, “What is big data?”, the company did not appear on the first 10-20 search results pages. Most of our visitors were late-stage buyers who had likely already knew who we were and decided to purchase an SAP product.

I also knew sales executives would understand the power of showing up first in Google. Given the low amount of early-stage traffic and poor search engine ranking for important keywords, I built a business case to get sales to pressure my peers in marketing to move ahead with the content marketing program.

As mentioned earlier, I had virtually no budget to carry out this content marketing plan. But when I spoke to the head of advertising, I learned that they spent a large amount of money each year on campaign landing pages. I dug into the data from the previous campaigns to find more than a 95% bounce rate, zero organic search traffic, and no social shares on many of these landing pages

So I used this information to propose they give me half their landing page budget. They said yes, with the understanding that they would be able to define the branding, use the copy they wanted, and include the right calls-to-action.

What I did was use budget that already existed to create a content marketing platform that also served as a landing page for advertising. The traffic generated from the advertising page was supplemented by organic search traffic, social shares, a lower bounce rate, and higher engagement with the brand.

In fact, I saved the advertising team half their landing page budget. With the other half, I built the content marketing platform to reach early-stage buyers to build awareness and engagement. The result meant I essentially delivered a 100% ROI before one article was even published. Pretty cool, right?

I fully admit I spent most of the first year “getting conversion wrong.” Pressure from our web marketers and salespeople lead to the first iteration of the content marketing site having dozens of links to product pages and various calls to action.

After half a year, the thousands of published articles and a few hundred thousand visitors had only produced a few dozen clicks on the “conversion pages” and CTAs.  Those interested in early-stage content were not directly interested in product specific information as a next step.

What I did learn, however, was that visitors who subscribed to the website, watched a webinar, or who went to one of our events were 10x more likely to convert. With that knowledge, I started using conversion tactics on more appropriate middle-stage content such as ultimate guides and events.

By the end of the first year, I was able to report excellent news about our content marketing ROI. The nearly 1,000 leads we generated had converted to about $750,000 in revenue, with half of those conversions coming from subscribers to the site’s daily newsletter. Based on our initial first-year expense of $100,000, it meant that the effort had a 7X ROI. The large majority of SAP programs that year produced zero ROI and we were proud to claim the highest ROI-producing program at SAP that year.

The site’s growth continued into the second year with thousands of leads and event registrations. Their form completions also converted into more sales and training revenue. Each success was proof that when companies meet customers where they are at in the buying journey, it can have a significant impact on ROI.

I won an internal company award, and was nominated for content marketer of the year in 2012 (losing only to content marketing pioneer Joe Chernov – congrats my friend!) But I also started getting asked to speak, and write a book, and join startups, and advise other companies. And that is what ultimately led me to where I am today!

I am so grateful to SAP – and those who supported us – for the opportunity to build the platform (which is thriving today thanks to the smart folks who came after me.)

Want to be the hero of the next content marketing ROI case study? Reach out and let me know your story!

Check out one of my SlideShare presentations not long after I left SAP on The Content Formula: